In the wake o’ the great desert hyzer-fest of 2019 we arrive at the Waco Annual Charity Open. The Brazos East course is set to bEast mode and we get our first taste of woods golf this season. Precision is the name of the game here, folks. To win this tournament you need finesse to pure the tree-lined fairways, power to capitalize on the abundant eagle opportunities — especially in the madcap dash to the finish on 15, 16, and 18 — and dollops of mental fortitude to scramble effectively, avoid the big number, and conquer the inevitable backups and delays that occur on this Jekyll and Hyde track.

Charlie Eisenhood and Jamie Thomas made their picks on The Upshot, now the Ultiworld Disc Golf writers have their say. Remember, we’re using the UWDG Power Rankings to determine Dark Horse status. This week, we’re excluding the top 8 in FPO and the top 15 in MPO. 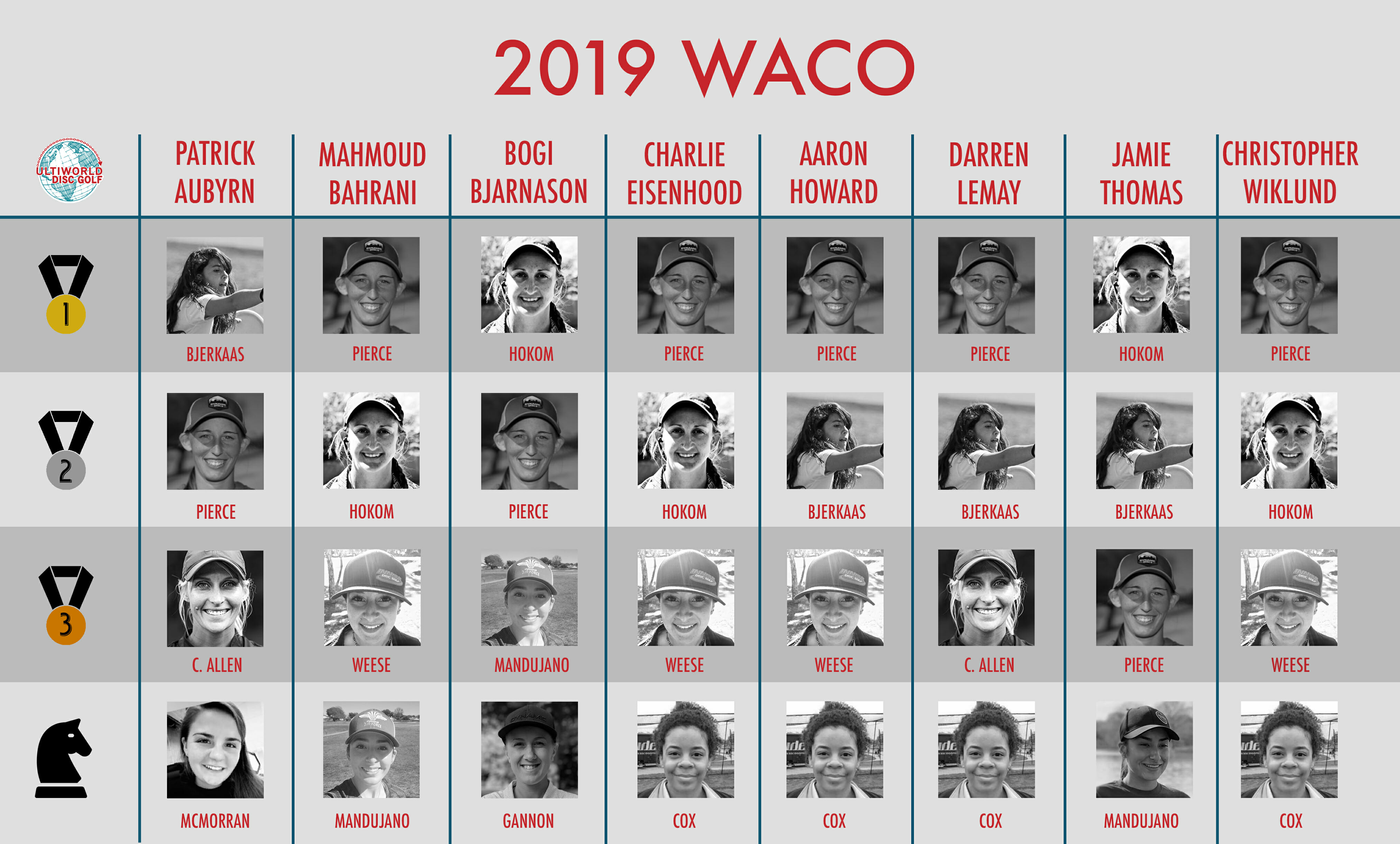 Paige Pierce all but disappeared from picks for the Memorial Championship, but a return to form in Arizona shows voters have short memories and Pierce is back on every podium. She is the two-time defending champion at WACO. Sarah Hokom, who held the lead for much of the final round of 2018, has yet to be consistent this season and will want to exact some retribution on a tournament that got away from her last year.

We’ll be seeing Valerie and Alexis Mandujano for the first time at an elite pro event. The Texas sisters have several amateur and junior world titles between them and are rated in the 900s. Valerie got more nods from the staff but do not sleep on Alexis.

Jessica Weese, Paige Bjerkaas, and Rebecca Cox all made four ballots with only Bjerkaas getting a first place vote. Congrats to Callie McMorran, as the tour freshman is coming off a solid start to the season and made the staff picks for the first time. 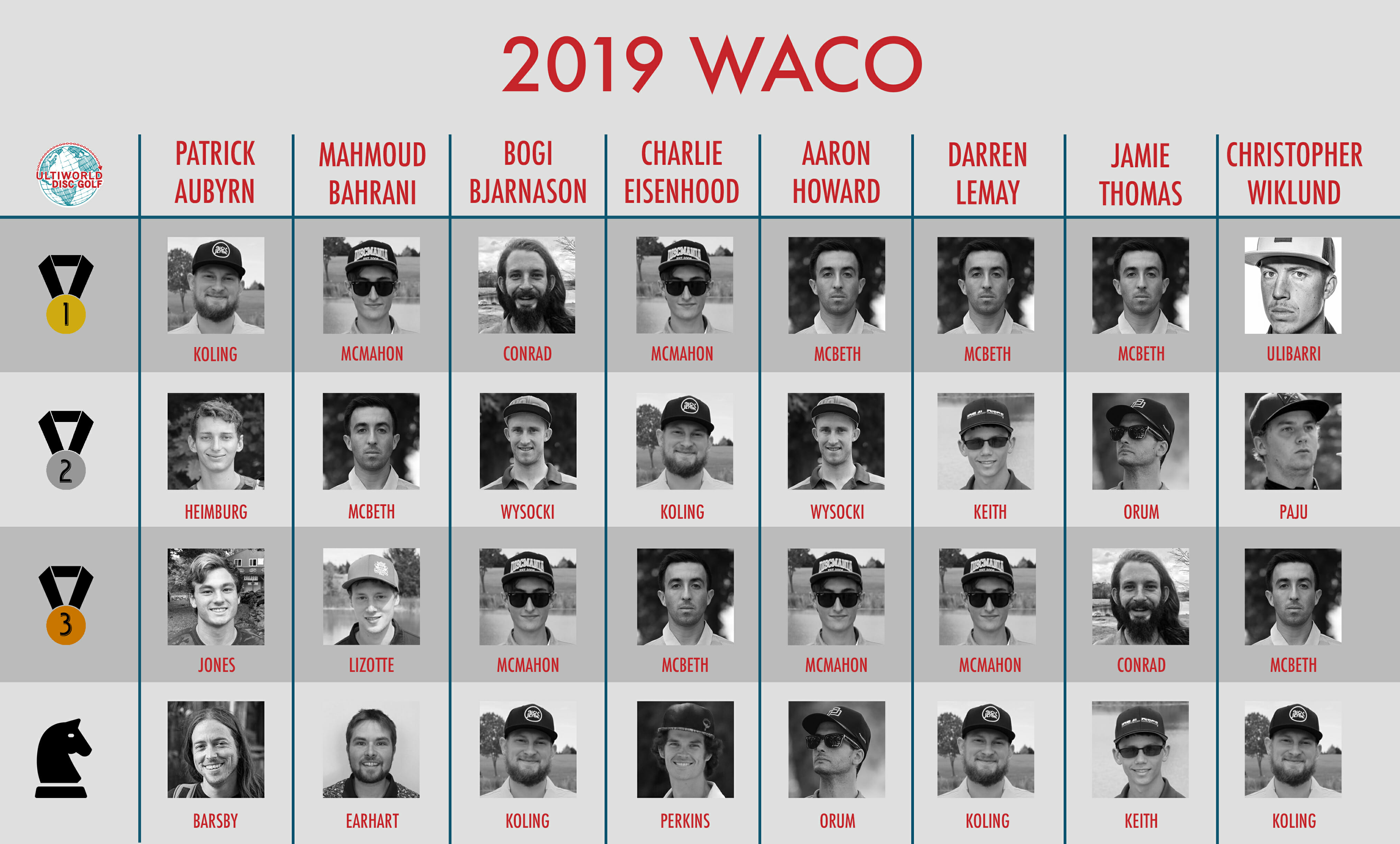 Despite finishing outside in 12th place in 2017 and skipping the event altogether in 2018, Eagle McMahon nabbed two nominations for the W. He practiced throwing more direct lines with mids and putters over the offseason, will it pay immediate dividends?

Horses for courses? Two-time reigning champion Jeremy Koling is the most popular Dark Horse, but only one writer picked him for the three-peat. The only other players to finish in the top 10 in both 2017 and 2018 were Emerson Keith and Devan Owens. The prior received mention as a DH. The latter? Nada. Have we paid them their due respect?

James Conrad seems an obvious contender. Remember, he broke onto the scene at Brazos East in 2017 when he shot 15-under par in the final round, finished tied for the lead with Koling, and lost in heartbreaking fashion on the first playoff hole. Is the third time a charm? Last but not least, Paul Ulibarri hopes to right the ship in Texas. He has three C-tier wins this year but finished tied for 51st in Vegas and tied for 29th at the Memorial.