Your Blueprint For Better Putting

July 17, 2020 by Jack Trageser in Instruction with 0 comments 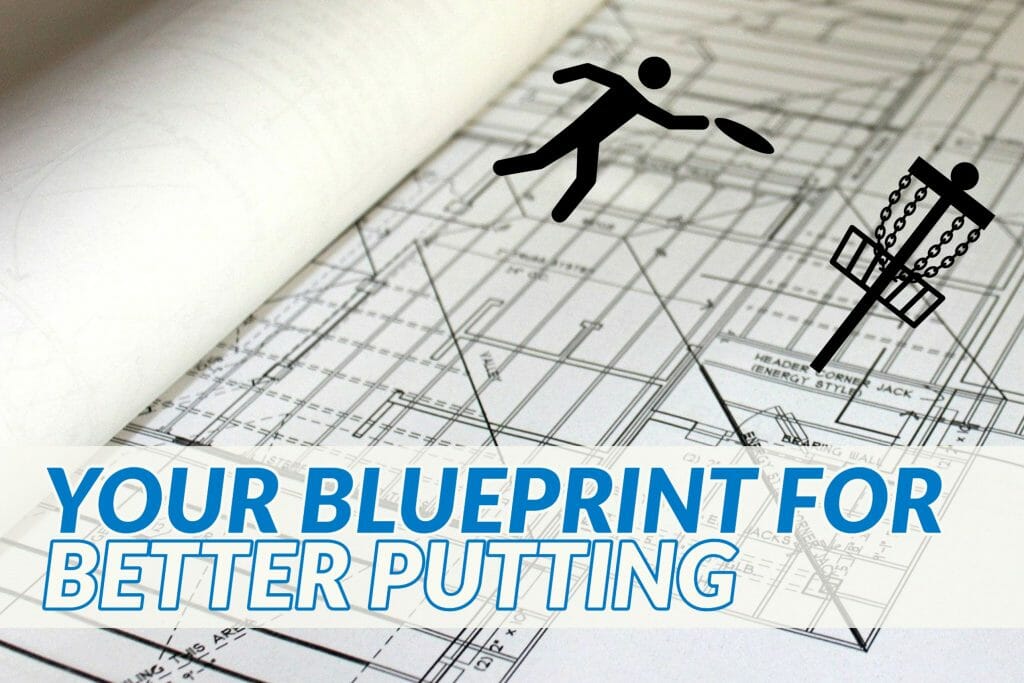 The key to achieving a goal is to have a plan. A blueprint for success. This is as true for improving athletic performance, including disc golf putting, as anything else.

In the first half of 2020, thousands of competitive-minded disc golfers asked themselves a question in response to closed courses and cancelled tournaments due to the quarantine: “What can I do to make disc golf downtime profitable in terms of lower scores in the future?” Many of us present ourselves with a similar personal challenge each offseason — or at least we should.

If I were to conduct a poll asking that question, the most popular answer would almost certainly be “work on my putting.” Missed putts feel like missed opportunities, more than any other aspect of the game. Three-putting from 35 feet feels like self destruction in a competitive round, and missing a 20-footer after an incredible drive can be soul-crushing. Converting a few misses into makes each round is the quickest way to shave strokes from your score.

If you want that payoff at the end, however, you need to think beyond simply “getting in your rep’s” each day. Twenty putts from 10 different stations is great for conditioning, but to achieve a noticeable, lasting breakthrough you’ll have to dig deeper. This project is about thinking as well as putting.

In other words, you need a blueprint.

The first step is to conduct some critical analysis. Think of your putting game as a boat that is taking on water. You know there are leaks, and you know they can be plugged: you just have to find them.

Step 1: Think back to missed putts in past rounds and try to identify any trends. For instance, do you regularly miss short putts left or right? Does your percentage of made putts go way down when there is more at stake? Do your missed putts all too often end up even further from the basket? Does it seem like you get more than your share of spit-outs? Make a list of what you think are your biggest leaks, then grab some discs and head for your nearest basket.

Step 2: Before you start putting, remind yourself that you’re going to take that same analyst’s approach at the end of the session. Take putts from a variety of distances (and inclines, if possible) without putting from the same place twice in a row. Take your time with each putt, as if you were playing a round. After misses, make quick mental observations so you can recall them later, then let them go and focus on the next putt. When you’re done, add to or refine the list you started earlier.

Step 3: Now contact a couple disc golf buddies, preferably ones you play with regularly. Ask them for their honest input. What are your putting strengths and weaknesses? What are your costliest chronic mistakes on the green? Do you let emotions get in the way, and if so, which ones — Fear? Anxiety? Anger? Use your friends’ answers to add to your list, then rank the items based on severity (how much of an issue is this for you personally) and impact (how many strokes is it costing you per round).

You’re now almost ready to start the hands-on part of this project, but the last bit of preparation is crucial. You need to create a plan of action to address each specific issue on your list. It’s easier said than done, but you need to know the cause of each leak so you can figure out the best way to address it.

You may feel stumped at this point. If you knew the cause of all those frustrating missed short putts you’d have fixed the problem yourself by now, right? While I don’t have the space here to address every issue, I’ll cover a few common ones and link to some resources that go into more detail. But remember, the main point is to take a systematic and purposeful  approach to make significant improvements to your putting game. Okay, onto plugging some common leaks!

First up: a tendency to miss even short putts left or right. This is usually due to horizontal movement of hand and disc during the putt, which makes it difficult to consistently release the disc directly at the target.

The reason this tip works so well is simple. A disc pulled back and then propelled along a straight line will begin its flight heading in the exact direction at which that line points.

If you’re interested to learn more about the importance of straight-line putting and how to retrain yourself, you can read up on that here.

If you tend to miss too many putts in general, the above issue is only one of several possible causes. The other common physical cause for demoralizing unforced errors such as missed short putts is a lack of follow-through. This sometimes happens because we mistakenly believe short putts only require a soft toss. It is important to always complete your putting motion, regardless of length. For help incorporating proper follow-through, check out this post.

The most common reason for missing short putts has nothing to do with technical flaws. It’s simply a lack of focus on the task at hand. If the putt is practically a gimme, it’s easy to take it for granted and begin thinking about the next hole. Or perhaps the hole went badly and you’re eager to get it over with and move on. The best way to eliminate these completely avoidable mistakes is to establish a specific putting routine and stick to it, no matter how short the putt. If you’re doing it at 30 feet, you should also be doing it at 10. There are even more causes of missed short putts and how to eliminate them here.

Do your putting percentages go down as the stakes go up? Pressure putts can undermine even the best players and in a variety of different ways. Stress and anxiety are known to be performance inhibitors in all sports, causing the body to tighten up and lose necessary fluidity. Sometimes it’s as simple as being distracted, thinking about how important the putt is when you should be thinking about aim or line or follow-through.

I’ve found that the best way to combat both is to stick to your routine, and make sure the routine includes thinking about the right things before and during the putt. This is straight out of Sports Psychology 101, and I sum it up thusly: Think about what you’re trying to do, NOT what you’re hoping to accomplish. I’ve talked about handling pressure, and proper ‘shot-thinking” in the past.

If you take three throws to complete a hole after being within 50 feet, either you made an avoidable mistake or got hit with a large dose of bad luck. (I’ve got tips on how to best deal with the instances when it’s truly a rotten break and nothing else.) If you suffer lots of three-putts, however, you’ve likely got a systemic issue that is easily addressed.

Here are the most common of those systematic issues:

When you fire bullet-putts at the basket, all kinds of things can go wrong. If you miss entirely, the disc is now moving away from the basket at full speed. If you hit the top or the cage, the disc still has plenty of energy and momentum to travel away from the basket. And sometimes accurate putts that would stay in the basket if thrown at a more reasonable speed use that excess, superfluous energy to escape the grasp of the chains.

To avoid long comeback putts (which often turn into three-putts or worse), use only enough velocity to hit the link of chain you’re aiming at with sufficient energy to push that link toward the pole. Except on short putts, the speed of the disc should not be the same when it arrives at the target as when it left your hand.

The key to doing this is to use arc. The longer the putt, the greater the arc. This enables you to get the disc to arrive at the target with only the necessary amount of speed. As a bonus, the arc means that on longer putts the disc will be moving downward (toward the ground) at the end of its flight, which will usually help it come to a stop sooner.

The next two causes of chronic three-putting have nothing to do with technique. One stems from flawed decision making and the other a lack of focus.

The object of golf is to complete each hole in the fewest strokes possible. Your decision to go for it boldly or go for it carefully or lay it up should be dictated by the answer you ask yourself: What are my odds of executing this shot successfully and what is the worst possible consequence if I miss?

Don’t confuse confidence with a blissful ignorance of things like odds and risk. If you know your chances of making a birdie putt from 50 feet are low and you’re playing a round where score counts, it makes sense to lay up and play for par. If you have the skill to go for it with enough finesse that a miss will result in a putt you make almost every time, that’s a different story. The key is knowing your limitations. Otherwise, you’re burning up three strokes to complete the hole from 50 feet.

As mentioned earlier, one of the best ways to maintain focus is to develop a routine and stick to it. This means going through the same steps every time regardless of how routine the throw or short the putt. The repetition will ensure that you don’t forget to do it in important or stressful situations. All routines different in little ways, but have the same critical elements in common. This is helpful in understanding the necessary basic components.

If you agree that working on your putting is a good way to achieve real score improvement, don’t just commit to an amount of time or putts each day. Use the below formula to create a customized blueprint to work smarter and succeed.

Comments on "Your Blueprint For Better Putting"