January 28, 2020 by Jack Trageser in Analysis, Opinion with 0 comments 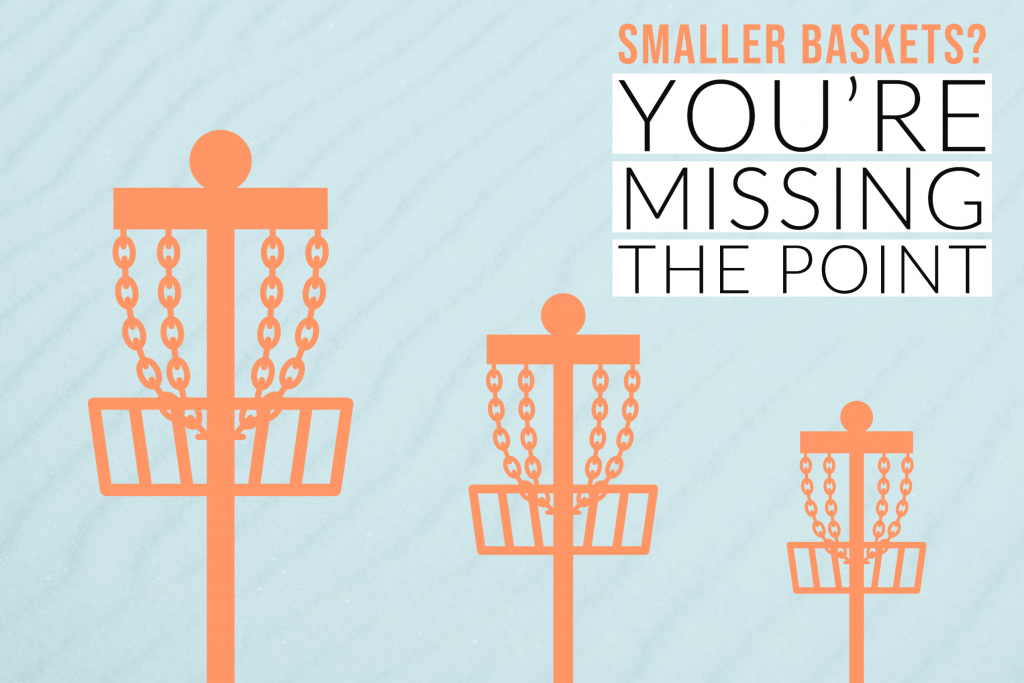 Where do you stand on The Great Debate about basket size on the pro tour? The subject has been debated extensively – on YouTube in 2018 via a Disc Golf Pro Tour roundtable, more recently in a PDGA magazine article by course design guru John Houck, and in thousands of discussions among elite players and their fans.

This is a pointless debate. Basket size and putting difficulty has nothing to do with the perceived lack of drama on the green in disc golf as a spectator sport.

Those in favor of shrinking baskets think top pros are just too good at putting using the current disc entrapment devices. They believe this has two negative effects on disc golf as a spectator sport: scores that are so low to par that outside observers scoff at disc golf as a professional sport, and a lack of drama on the putting green. Putts inside the circle for touring pros almost always end up inside the basket.

Some pros are opposed to the change, for an understandably self-interested reason. Putting is not their strong suit and they don’t want that weakness to be further magnified. But others make more practical points. If targets are smaller, they contend, players will lay up from longer distances more often, robbing spectators of those twisting, floating, outside-Circle 2 gems that provide some of disc golf’s best spectator moments.

Others question the practicality of retrofitting thousands of existing courses and the wisdom of having pros compete with markedly different equipment than the fans.

The issues that the Basket-Shrinkers raise are real, but smaller targets and less made putts won’t “solve” them, if indeed they even require solving.

I wrote a book called The Disc Golf Revolution, and part of it involves comparing and contrasting disc golf and traditional (ball) golf. One of the first chapters, titled “The Future of Golf,” makes the point that disc golf features nearly all of ball golf’s appeal yet none of its numerous drawbacks. You know that list: cost, time to play, difficulty, history, and a culture of elitism, environmental impact…

I bring this up now because at the end of that chapter, per my training as a journalist, I presented the other side of that argument in a “devil’s advocate” section subtitled, “7.5 Reasons Why Ball Golf is Better Than Disc Golf.” One of those 7.5 reasons is the undeniable fact that disc golf does not – and cannot – replicate the incredible contrast featured in ball golf between the speed and distance of a powerful drive and the delicacy, the breath-holding drama of a long, slow, undulating putt.

A 30-foot putt in ball golf might last as long as 30 second as it rolls slowly across the green, while a 30-footer in disc golf is over two blinks after it leaves the player’s hand. Unless it ends in a roll-away, that is, which ironically makes for some of disc golf’s most dramatic moments. What do those slow, serpentine, excruciating rollers resemble? That’s right. Ball golf putts.

Disc golf putts inside the circle don’t lack drama in pro events because they go in too often, but rather because they go in, or don’t, too quickly. That is never going to change, no matter how small and challenging baskets are made to be. It is what it is, and really, that’s ok.

Another point I make in my book is that disc golf’s greatest value is as something to DO. This is evidenced by the sport’s continued strong growth in new courses, players, and market size. As disc golf participation grows, the segment of the overall disc golfing population who choose to also be spectators and media consumers also grows. They’re watching in large part because they can relate to what they’re seeing. Who among us didn’t relate to Eagle McMahon’s crucial missed putt and reverse somersault at the 2019 Portland Open? We’ve all missed that putt and felt those feelings.

Disc golf may not feature the drawn-out drama of a ball golf putt, but disc golf spectators, nearly all of whom are also avid players, feel the anxiety of a 30-foot putt. As easy as they can appear, we know how easy those putts are to miss. We know the very real potential for anxiety, fatigue, or a momentary lapse of focus.

Give it a try if you want, PDGA and DGPT. Use smaller baskets for some top-tier pro events. You’ll get tougher-scoring courses, and putts inside the circle won’t be quite as much of a foregone conclusion. But it won’t change the real issue, which is the unalterable fact that disc golf putting – as something to watch – isn’t and will never be quite as dramatic as ball golf putting.

Personally, I don’t think it’s a big deal. Those of us who play know there is plenty of drama and challenge when you’re the one doing the putting, and that is what really matters.

What do you think? I hope you share your own take here by posting a comment, but don’t just say yea or nay on changing basket size. Let me know where you stand on my main assertion. Do disc golf putts lack drama for spectators, and, if so, is it because they go in too often, or because they go in too quickly?

Comments on "On The Pro Tours, Basket Size Doesn’t Matter"