The pros are in Charlotte for the tour's most unique event

October 17, 2019 by Christopher Wiklund in Preview with 0 comments

The 2019 Disc Golf Pro Tour has been nothing if not interesting, and this weekend’s Championship will cap off the professional touring season with its win-and-advance format at a “new” venue in Charlotte, North Carolina.

The year has been tumultuous for the DGPT from the get-go, and the Tour Championship is no exception. Originally, the event was to be held in Emporia, Kansas, and that announcement came several months into the year as it was. But when the team of Jeff Spring and Todd Rainwater took the reins from former Tour Director Steve Dodge, the event was moved to the Charlotte-area to more easily accommodate touring pros’ travel schedule. The past two years saw the event held at New World Disc Golf in Jacksonville, Florida.

Defending champions Chris Dickerson and Sarah Hokom will both be in attendance and are both are coming into the final event of the season looking strong. Hokom waited until Vermont to take down her first and only Pro Tour win of the season, and just won the PDGA National Tour finale at the Hall of Fame Classic. She looks like she has finally found her groove with her MVP plastic, just in time for the season to end.

Dickerson fell one stroke short of competing in a playoff against Calvin Heimburg and Adam Hammes at the HOFC, and just like last year is looking for his first elite win of the season. Dickerson has looked his usual rock-steady self throughout the season and turned in a couple of big top five finishes at events such as Pro Worlds and the USDGC. Maybe his limited touring schedule will help him power through this final event while others are starting to feel the road catching up with them.

This event is unique for many reasons, not the least of which being the overall structure of the event. Per the event website: the top 32 men and top 16 women in the DGPT Standings will qualify to play the event. Competitors advance through four rounds for MPO and 3 rounds for FPO towards the championship.

No player has won the DGPT Championship twice.

As we touched on earlier, the Championship takes on a format we only see once a season. Players are seeded based on tour points standings, with the top eight MPO and top four FPO players receiving byes to the semifinal round.

In prior years, players had to win their respective cards in the semifinals to make the finals, with one wildcard making the final with the lowest remaining score. This season the lowest four scores advance regardless of card. 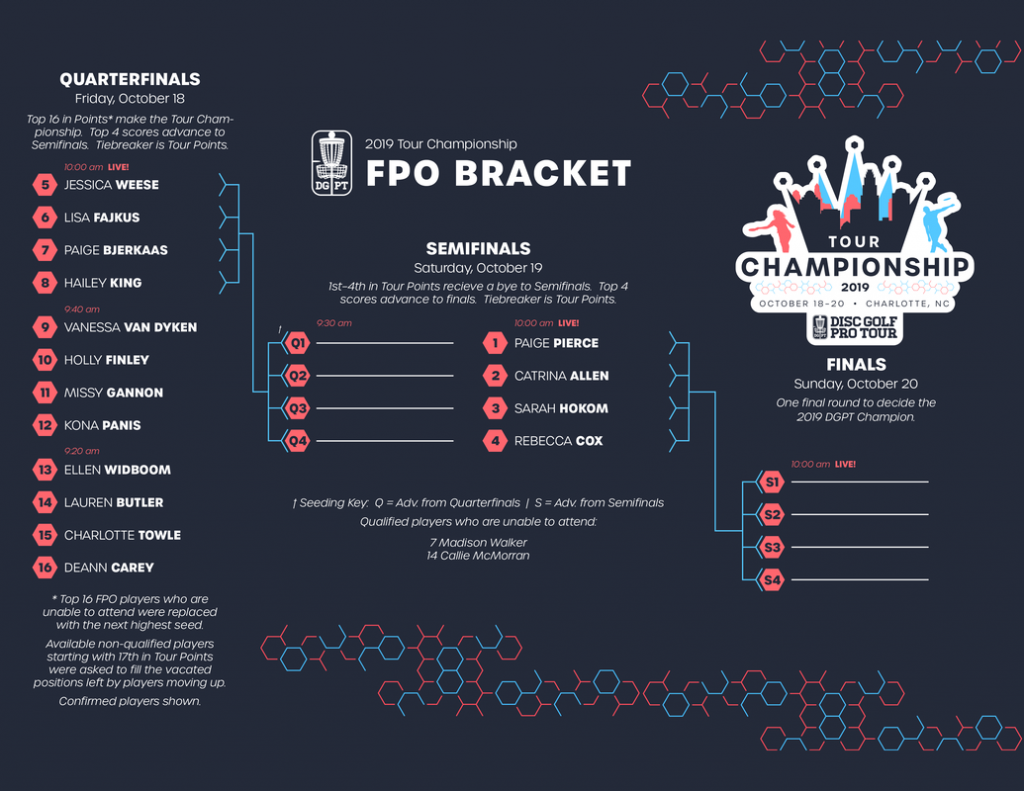 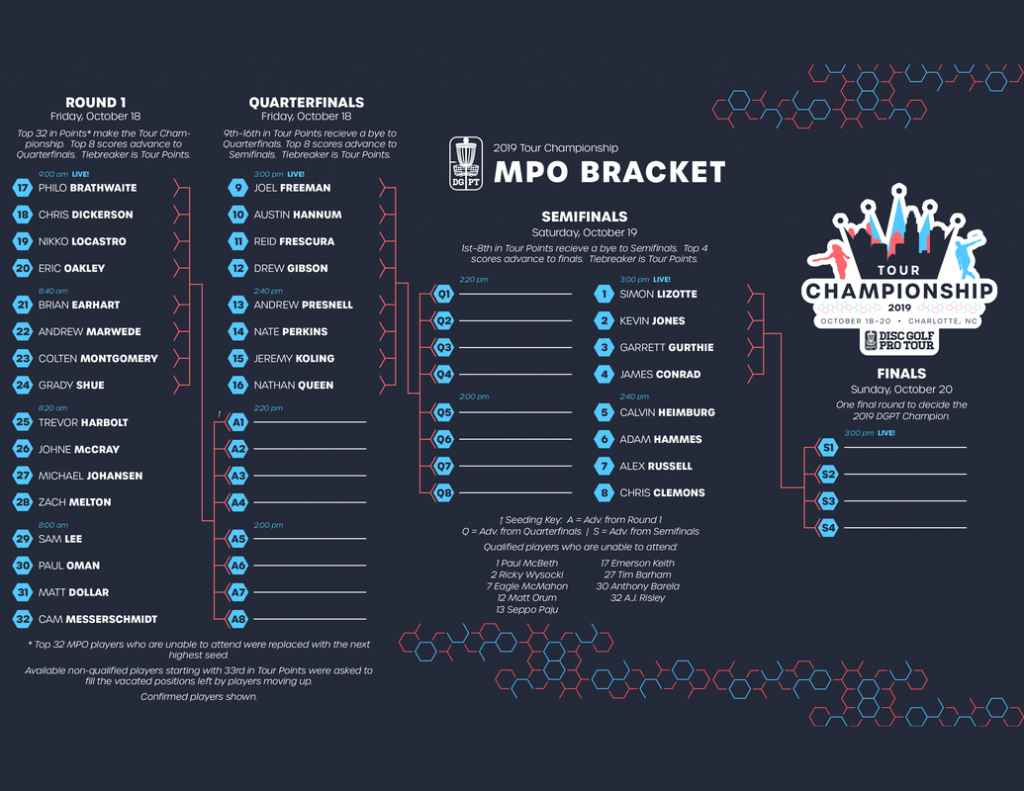 Hornets Nest has a long tradition in Charlotte, having helped host the 2012 PDGA Pro World Championship,1 but it’s looking much different now. The course also had a makeover prior to the 2018 PDGA Amateur World Championship that has been tweaked.

John Houck, Jeremy Koling, Madison Walker, and Steve Brinster all had input on the current course layout, with the Charlotte Disc Golf Club helping to institute many of the changes.

The front nine lets the players air out the disc a couple times, and includes an island on hole 2. The back nine, with the exception of the par 5 hole 13, is much more wooded, like the NC golf you’ve heard tell of. Who are we kidding, there are trees everywhere.

The main weather story will be how a tropical depression impacts the tournament Saturday. We will begin to feel the effects of the system Friday as afternoon winds shift out of the northeast. Rain should move into the Charlotte region Saturday afternoon. An easterly wind will also develop on Saturday and strengthen throughout the day. The system will be clear of the area Sunday, leading to nice afternoon conditions.

Friday: Afternoon highs will warm to the mid to upper 60s. The wind should remain calm in the morning, but give way to a gentle northeast breeze.

Saturday: Cloudy conditions will keep temperatures in the low to mid 60s. Rain should move in from the south in the afternoon. East wind around 10 mph possible.

The DGPT YouTube Channel will have tons of live streaming of rounds, starting with two MPO rounds and one FPO round on Friday. Jomez Pro, Central Coast Disc Golf, and Gatekeeper Media will have post round coverage. UDisc Live is the go-to for scores. 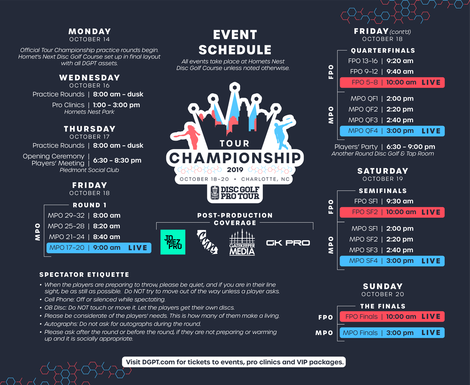