Tuesday Tips: How Disc Stability And Release Angles Work Together

May 2, 2017 by Matthew Norton in Instruction with 5 comments

In the most simplistic form, there are three main flight paths you can get your disc to fly on: a hyzer line (fade left for a right-handed backhand player), straight line, or anhyzer line (turn right for RHBH). These three flight paths allow the disc to finish either right, straight, or left depending on if you throw sidearm or backhand; left-handed or right-handed.

Now, when you’re out on the course, every shot will require a slight variation of one of these flight paths. For example, you might need a short hyzer on hole 1, a sharp anhyzer on hole 2, a long, straight hyzer on hole 3, etc. In order to achieve all these different flight paths, you need to know when to throw “what” disc on “which” angle. Often times, though — and especially as a beginner — the terminology of flight paths and release angles can cause confusion, making it can be difficult to know which mold should be used. To help with this, I’ve come up with a simple disc golf equation and explained each component below.

Disc stability is best described as a spectrum, with overstable on one end, understable on the other, and neutral in the middle. All discs on the market range in different levels of stabilities and will fly at a slightly different stability depending on your arm speed and power.

In general, overstable discs require more power and arm speed to achieve their desired results and are more wind-resistant. Neutral discs are just that: They’ll take the angle you put them on. Understable discs have a propensity to turn more easily and are better for newer players, as they can fly straight paths at lower arm speeds. The trade off, though, is that they often are abused by wind.

Angle of release refers to the angle of the disc as it is coming out of hand during your throw. The three main angles of release are: hyzer, flat, and anhyzer. A disc can be thrown at any variation of these angles (extreme hyzer, slight hyzer, etc.) and are sometimes referred to in geometric terms (“45 degree hyzer”) or like hands on a clock (“7 o’clock hyzer”).

Flight path is the line your disc is flying on after you’ve released the disc. As stated earlier, the three main flight paths are a hyzer line, straight line, or anhyzer line. (A disc that continues to turn from a flat release can also be referred to as a turn over.) 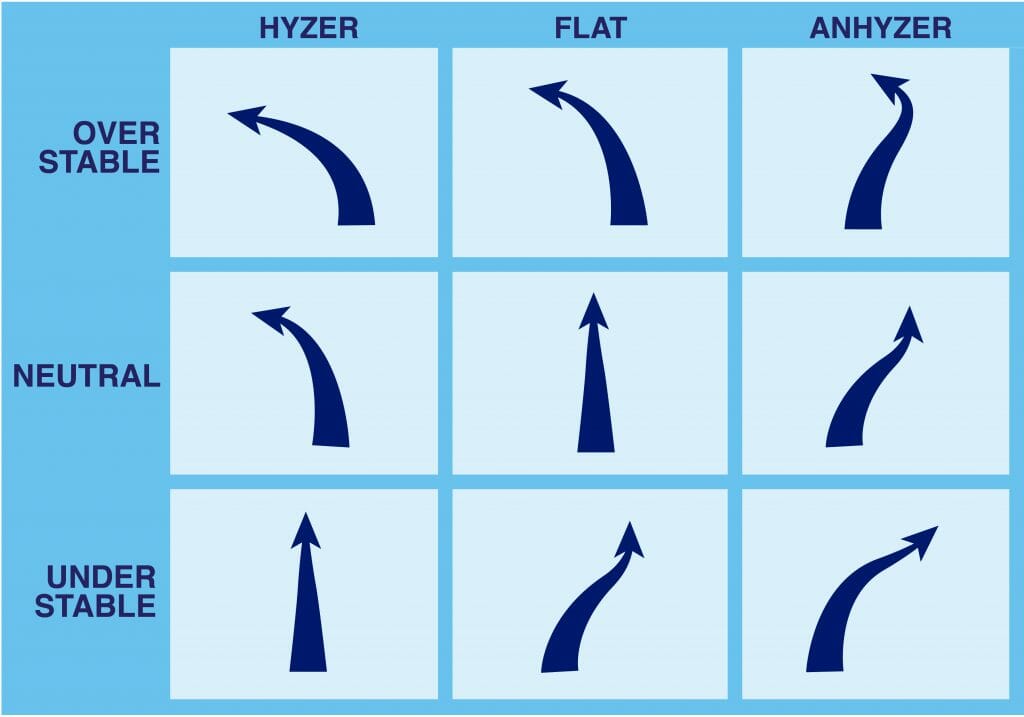 Now that you understand the equation, you can start looking at how each combination changes the flight of the disc. If you’re a left-handed backhand thrower or right-handed sidearm thrower, simply imagine these lines as a mirror image.

Too many players rely on throwing only their overstable discs for hyzers and their understable disc for anhyzers. Next time you’re on the course, think about using this equation to help with your shot selection. You might realize you should have been throwing that Roadrunner on a hyzer all along.

Comments on "Tuesday Tips: How Disc Stability And Release Angles Work Together"