To say the wind had an effect on scores during the recent Waco Annual Charity Open in Waco, Texas, would be a vast understatement. Watching both live and post-produced coverage, it was easy to see the wind was playing a factor. We saw Ricky Wysocki miss putts we see him almost never miss; we saw players carding uncharacteristic triple bogeys on hole 5, the toughest hole on the course; and we saw players turn their discs over running for eagle on hole 6.

So I began to ask myself: Just how much effect did the wind have on scores? While ultimately this is a nearly impossible question to answer, I did find some interesting connections in my analysis of the weather and play of the event.

Being a meteorologist, I immediately began looking for the closest credible weather source in the area. A quick look at the NOAA National Centers for Environmental Information led me to a weather station located about five miles from Brazos East Park. This weather station obtained wind readings every five minutes, resulting in fairly high resolution data to work with. I ordered a data package for Thursday, Friday, and Saturday of the event, then broke the dataset down by looking at only the hours from 8:00 a.m. to 6:00 p.m. each day. This captures the full scope of action, from when the Open Women’s field teed off in the morning to the time Open wrapped up in the evening.

In general, the data supports that idea that wind speeds increase during the afternoon hours. This makes sense from a meteorological perspective as well, because as surface temperatures warm, the difference in atmospheric temperature and surface temperature increases. This increasing temperature gradient leads to a pressure gradient, which leads to the production of wind. That’s enough meteorology mumbo jumbo for now though — this is about disc golf.

The only day that did not exhibit this expected behavior was Friday. On Friday, the wind speeds actually decreased some in the middle of the day before picking up again during the late afternoon and early evening. The day that best exhibited usual characteristics was Saturday, which had a lower average wind speed. The average wind speed on each day was as follows: 14.8 mph Thursday, 17.8 mph Friday, and 10 mph Saturday. 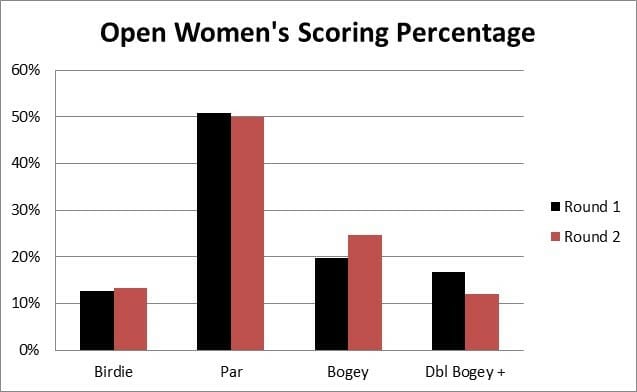 In the Open division, meanwhile, only 25 of the 741 players in the dataset – or just a shade over 33 percent — shot better in the second round than in the first. In fact, 45 of 74 shot worse rounds during the second round. In terms of averages, the women’s field shot an average of 1.72 strokes better per player, whereas the Open field shot 0.81 strokes worse per player. 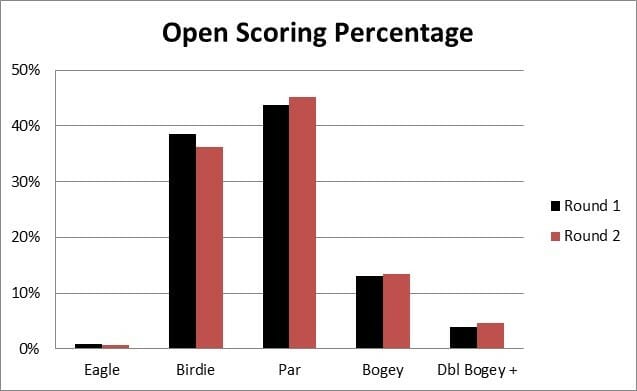 The Open field, though, made adjustments on the third day of the tournament, as 48 players carded better final rounds than second rounds. This number led to a whopping average of 2.2 strokes better per player, with Austin McNabb, Addison Collins, Andrew Presnell, Julian Dussan, Trevor Harbolt, and Eric Oakley leading the way. Each of these players improved their scores by double digits in the third round. The women’s field saw 10 players shoot better in the third round, as opposed to the second, for an average of one stroke better per player. Tina Stanaitis and Maria Oliva saw the biggest improvement at 12 and 7 strokes, respectively. It should be noted that, according to the weather data, the wind was noticeably more mellow during the final day of the tournament as opposed to the first two days.

So what does all of this mean? For this tournament, at least, one could argue that the women handled wind conditions better than the men. This statement can be made with the backing of the data from the second round of the tournament: Despite playing in higher wind speeds than experienced in the first round, the women’s field played better as a whole during round two. This same trend was not seen in the Open field. In fact, the Open field played in conditions similar to those it experienced in round one — not only in wind speed, but also direction — and in spite of the familiarity the field, as a whole, shot worse the second round. Both fields were able to capitalize on the somewhat calmer conditions on championship Saturday, though, and it will be instructive to keep studying these discrepancies as the sample size increases throughout the season.