What Happens When Disc Golfers Go ‘On Tilt?’

If you’ve ever sat down for a poker tournament, or watched one on television, you’ve likely seen at least one person go on tilt. Tilt is a mental state where players adopt foolish strategies as a result of frustration from a previous hand. In poker, this is normally characterized by overly aggressive play, and you can watch a player’s stack of chips dwindle quickly as he allows his anger to play for him. There are some interesting comparisons to disc golf here, where you can sometimes see players fall apart – either on camera, or on the scorecard.

Ricky Wysocki took a double bogey on Hole 8 in the final round of the Silver Cup in what some have described as a tilt-like moment. Wysocki, however, calmed himself down, followed up on Hole 9 with a birdie, and kept up the solid play to win the tournament. We’ve written previously about Bogey Recovery – the tendency of a player to improve after a bogey – but the frustration some players feel after a bad score may not disappear after a single hole. The chart below allows you to toggle between some of the top players’ scoring distribution on average and when potentially on tilt, which for these purposes is defined as the three holes following a bogey.

The first takeaway is that some of the conversation surrounding players losing their cool, and their score, may need to be toned down; there aren’t many huge drop-offs. Yes, almost all players are going to let their emotions get the best of them occasionally, but the top pros get to the top on the strength of their mental game.

The chart below shows the change in birdie percentage in the three holes following a bogey. Notice that the players with the biggest drops tend to be the younger players. Drew Gibson and Eagle McMahon, for example, are both newer to touring. Alex Geisinger didn’t have quite enough holes of data to be presented, but is right there with McMahon and Gibson with a 14 percent reduction in birdies when on tilt. 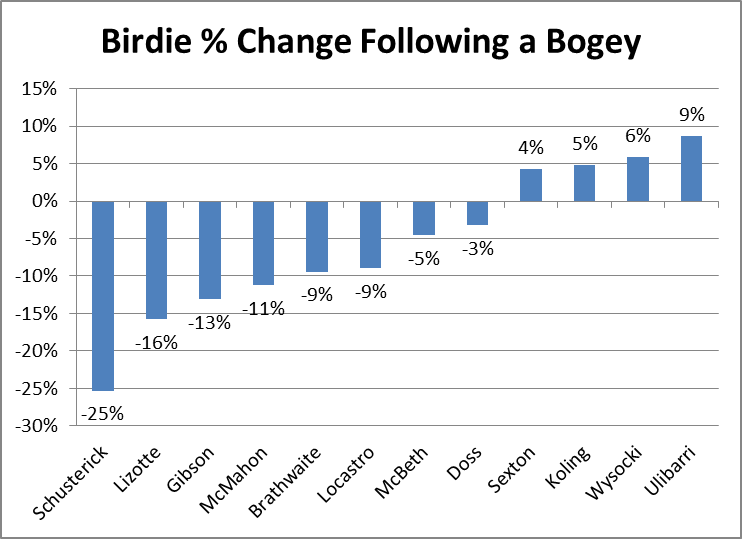 Many people will have thought of Nikko Locastro when clicking on this article, and although he’s clearly a player who can get frustrated by bad holes, the idea that his scorecard melts down with him isn’t supported by the data available. He shows a slight reduction in birdies, but also gets slightly fewer bogeys. Will Schusterick’s an interesting case, where he sees a steep reduction in birdies following bogeys but also isn’t falling off and getting a great deal more bogeys (as seen in the next chart). The data suggests he may respond by playing safe golf and going for par. 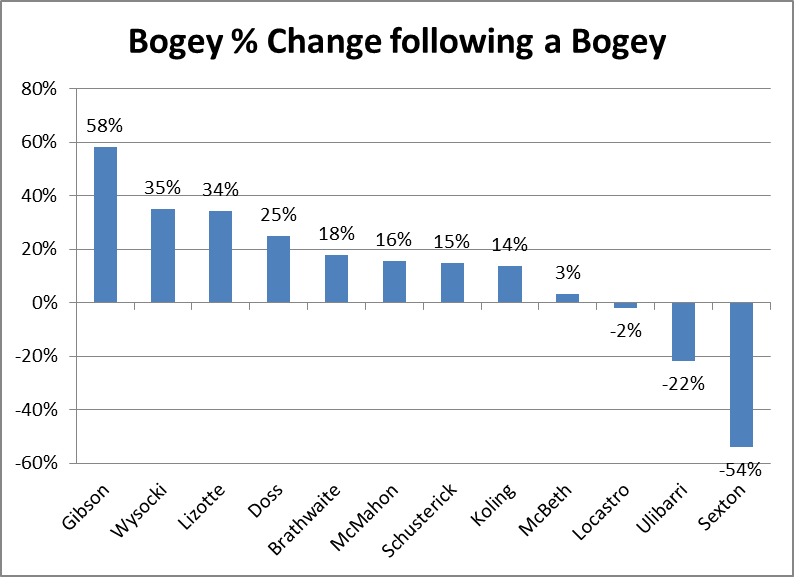 Although we don’t see the huge swings we may anticipate from all the chatter online, it is interesting that the majority of pros are getting slightly fewer birdies and more bogeys in the holes following a bogey. Nate Sexton and Paul Ulibarri are the only two players who are on the increased performance end of both charts. Ulibarri may be benefiting from the same mental game improvements as his wife, Catrina Allen, as he rarely strings bogeys together. Sexton is leading the tour considerably here and has only carded three bogeys all year when presented with an opportunity to go on tilt. Suffice to say, he is the best at navigating the tilt zone.

The impact is certainly not all driven by frustration or holes in a player’s mental game, and it’s nearly impossible to determine how different bogeys impact a player. At a birdie-fest tournament, for example, a bogey probably hurts more than on more challenging courses like Maple Hill or DeLaveaga. Additionally, with how close tournaments have been this year, players may feel that there is increased pressure to pick strokes up and start playing more aggressively. If this is the case, though, it doesn’t seem to be translating into many more birdies, and the increase in bogeys is significantly more damaging.

Comments on "What Happens When Disc Golfers Go ‘On Tilt?’"